Influenza is a respiratory illness causing serious complications in children, the elderly, and immune-compromised people. Influenza’s virus types A and B undergo frequent mutations and antigenic re-assortments, necessitating new influenza vaccines annually. Tests of BlueWillow’s nanoemulsion (NE) adjuvant in animals and humans have shown promise for its use in safe and effective influenza vaccines

Influenza illness is a respiratory infection with particularly serious complications in children, the elderly, and immune-compromised people. The illness is caused by influenza virus types A and B.  Antigenic drift necessitates the production of new influenza vaccines annually.

Active immunization is a mainstay for preventing influenza illness. However, current seasonal influenza vaccines have suboptimal efficacy and a significant proportion of the population goes unvaccinated each year.

Intranasal administration of a NE influenza vaccine offers the potential of enhanced protection via its ability to elicit both a mucosal and a systemic immune response, and it provides an option for individuals that prefer needle-free administration.

When used with intranasal vaccination, BlueWillow’s nanoemulsion (NE) adjuvant elicits both mucosal and systemic immunity. To date, BlueWillow has tested its NE adjuvant in combination with various seasonal influenza antigens in mice1,2, rabbits, ferrets3, and, most recently in man4.

Studies in ferrets are recognized as the most relevant influenza animal model for testing immunogenicity and efficacy. Following intranasal vaccination with NE-seasonal influenza vaccines, significant immune responses, cross-protection and antigen sparing properties have been demonstrated in four large ferret studies. In the ferret study represented by the chart below, a single intranasal administration of NE-adjuvanted Fluzone® vaccine (dosed at 2.5, 7.5 and 12µg of antigen per strain) elicited robust HAI titers against all three strains of influenza, as compared to the standard 15µg dose of intramuscular Fluzone®: 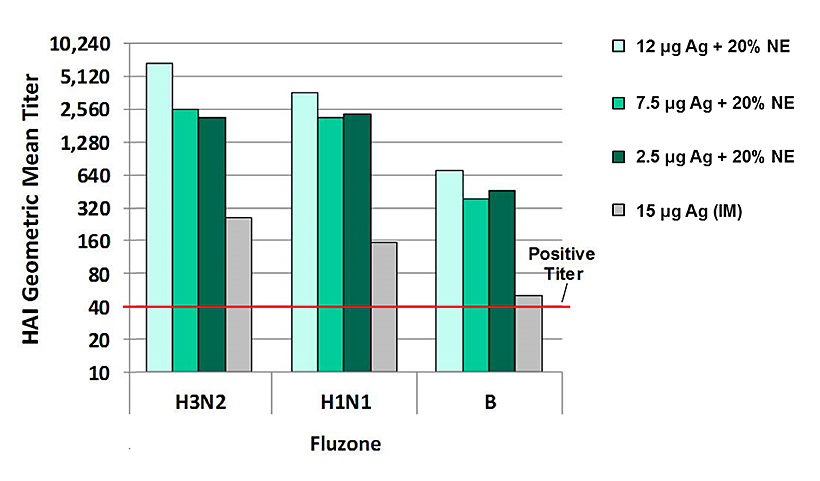 Following completion of a large IND-enabling toxicity study in rabbits, the FDA approved BlueWillow’s IND application for NB-1008, an intranasal NE-adjuvanted seasonal influenza vaccine administered via a nasal dropper. BlueWillow proceeded to complete a randomized, controlled Phase 1 study in the United States involving 199 healthy human volunteers. The primary endpoints of the study were safety and immunogenicity as determined by neutralizing serum antibodies.

All NE vaccine doses in the Phase 1 study were well tolerated without safety concerns or significant adverse events. In addition, the target 20% NE adjuvant dose combined with 10μg of strain-specific antigen elicited (i) robust systemic immunity based on increases in serum HAI GMT for each strain (shown in the chart below), (ii) ≥70% seroprotection for all strains, and (iii) a rise in antigen-specific IgA in nasal wash specimens:

2 Vaccine; 2003; 21: 3801-3814; “Development of immune response that protects mice from viral pneumonitis after a single intranasal immunization with influenza A virus and nanoemulsion”

3 Clinical and Vaccine Immunology; 2011; Vol. 18, No. 7: 1167-1175; “Intranasal Immunization of Ferrets with Commercial Trivalent Influenza Vaccines Formulated in a Nanoemulsion-Based Adjuvant”